block 1 – chapter1 - Calm before the storm

Karmaveeran gains consciousness. Wakes up injured in the right hand, sword by the side, and memory loss.

Notices a huge free in the far horizon and a river flowing down from there.

Intends to head down the river and then towards the tree.

Hears a loud shriek. Discovers an ancient mystical beast on a rampage in a village in the forest.  Villagers attack the beast.

However, KV became curious about the beast. The villagers allege that the beast had been kidnapping kids from the village and devouring them.

Curious, he begins to follow the blood trail and investigate.

KV discovers a cave, in which there lived an entire race of the beasts. Multiple varieties. There he learns about the ancient mystical beasts and their history intertwined with the history of the kingdom itself, Kumari Kandam.

by the end of this block, KV wins the heart of the people. He gets arrested by the national guards, alleging that he's a spy from a neighboring country.

Introduction of Manu Dharman. KV is summoned to the court of MD for violating the code of conduct and breaching national security.

Trial by combat with mystical beast. KV has to prove himself pure of heart/innocent. In the fierce battle, he not only won over the beast but also revealed a talisman/tattoo which indicates that he is the rightful heir to the throne.

The people cheer. This puts MD in a difficult spot. His ego is scarred.

block 7 – Manu Dharman inherently believes that KV somehow learned the past and faking it as the heir. He conspires to kill KV. MD hires contracts killers from allied nation.

block 8 – It becomes clear that the person who injured KV is the king of allied country, Duriyothana. Revelation of the secret past.

KV earns his place on the throne.

Need backstory for these.

TIMELINES OF TAMIL EARLY HISTORY1. 200,000 to 50,000 BC: Evolution of 'The Tamilian' or Homo Dravida".2. 200,000 to 100,000 BC: Beginning of the Tamil language.3. 50,000 BC: Kumari Kandam civilisation.4. 20,000 BC: A lost Tamil culture of the Easter Island (Chile) which had an advanced civilisation.5. 16,000 BC: Kumari Kandam (Lemuria) submerged. (Lost Atlantis - Known by western archaeologists)6. 6087 BC: Second Tamil Sangam established by a Pandya king.7. 3031 BC: A Chera prince in his wanderings in the Solomon Islands (East of Papua New Guinea) saw wild sugarcane and started cultivation in Kumari Kandam.8. 1780 BC: The Third Tamil Sangam established by a Pandya king.9. 7th century BC: Tolkappiyam (the earliest known extant Tamil grammar).10. Discovery of the "Jaffna seal", a seal bearing a Tamil-Brahmi inscription assigned by excavators to the 3rd century BC. 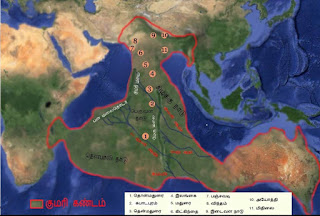